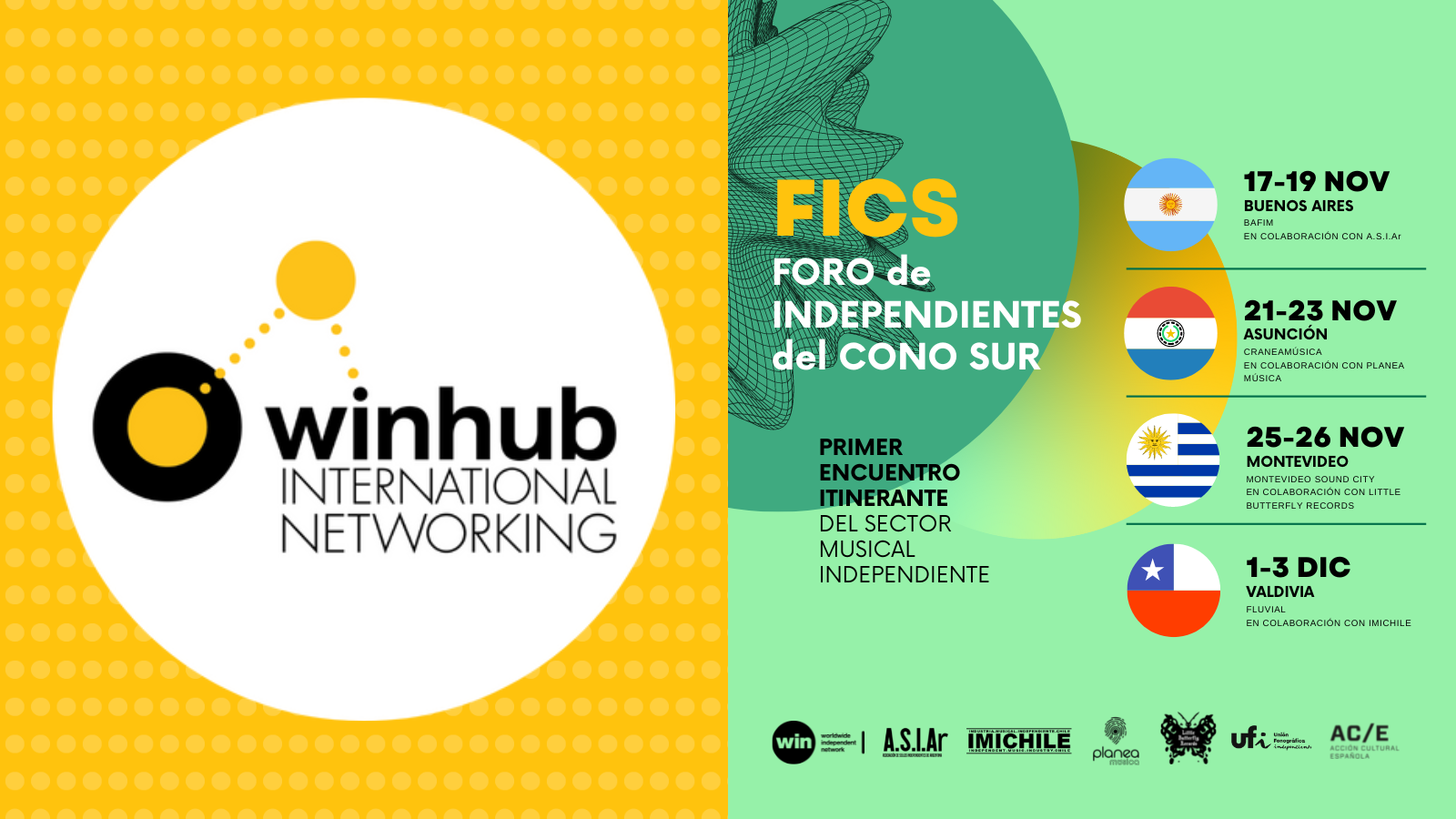 The first activities of WINHUB, an international networking project connecting the independent recorded music community through face-to-face and online events, will begin in December.

The first edition of the Southern Cone’s Independents Forum (FICS) will take place in Argentina, Paraguay, Uruguay, and Chile from November 17 to December 3.

For the first time, a WIN board meeting will be held in Chile.

WIN is pleased to announce two new projects that will contribute to the organisation’s efforts to develop new associations and foster cross-regional collaboration in key music markets, as well as helping members of existing independent music trade associations build and maintain international connections and bridge gaps between markets.

WINHUB is a brand-new international networking project to connect the independent recorded music community around the world. Developed by WIN, it will expand and complement the offering of benefits and resources available to the worldwide network of independent music trade associations. It consists of a digital portal where companies can register and connect with colleagues abroad; online sessions with a regional focus or around a specific topic organised in collaboration with local trade associations; and face-to-face activities in existing conferences and industry events. The primary objective of this initiative is to foster market access and export capacity within the independent recorded music sector, bridging the gaps between territories, and providing opportunities for members of WIN associations to establish and maintain international connections.

Truly connecting the independent community around the world is one of our main goals. WINHUB will create new opportunities for independent music companies to build relationships with members of other WIN associations, promoting inter-regional collaboration and business development.

The first WINHUB activities will begin in December with an in-person networking session as part of the Fluvial conference in Chile, which will also host the next WIN board meeting. The first online event will be held in January 2023. WIN associations AIM (UK), AIM Ireland, AIR (Australia) and IMNZ (New Zealand) will present their local independent music markets and offer members the chance to engage in networking sessions with businesses from the other participating countries. All sessions and meetings will take place within the new WINHUB portal, which will also allow participants to browse a directory and filter companies based on common interests. Applications will open soon for members of the participant associations.

International networking is a top priority for WIN so that independent music companies that are members of our network of trade associations can connect and share insights to propel business development and develop reciprocal promotional opportunities. The first WINHUB International Networking online event will be a great opportunity to connect AIR (Australia) members with other companies in Ireland, New Zealand, and the UK.

WIN continues to combine efforts to support existing members with initiatives to strengthen the independent sector by developing new associative structures in markets without current representation in the organisation.

The Southern Cone’s Independents Forum (Foro de Independientes del Cono Sur, FICS) is an itinerant summit of independent music companies and professionals promoted by WIN and the LatAm Network, a working group to promote associativity and capacity building in the Latin American region. This group is coordinated by WIN and consists of current members ASIAr (Argentina), ABMI (Brazil), IMICHILE (Chile) and UFI (Spain) and individual companies from other territories where there is currently no trade association affiliated with WIN.

The idea for the project took shape during a meeting of the LatAm Network in Bogotá, Colombia last May. In the first edition, FICS will visit Buenos Aires (Argentina), Asuncion (Paraguay), Montevideo (Uruguay) and Valdivia (Chile) from November 17 to December 3. This initiative seeks to contribute to the economic development of the music industry in the Southern Cone sub-region and its integration into global value chains. Its goals are promoting cooperation, dialogue and knowledge exchange among music companies and professionals in the four participant countries, as well as paving the way to the creation of new independent music trade associations in Paraguay and Uruguay.

FICS promotes regional associativity, which is very necessary in Latin America. This is important because the live sector is becoming more interconnected, but the recorded music industry is not well articulated. WIN is the key to this integration and FICS is the tool to accelerate and implement it.

A range of activities, including panels, presentations, workshops and networking sessions, will be organised by WIN in collaboration with local partners A.S.I.Ar, IMICHILE, Planea Música and Little Butterfly Records within the framework of existing conferences and events: BAFIM, Fluvial, CraneaMúsica and Montevideo Sound City, respectively. A face-to-face meeting of the LatAm Network will take place in Valdivia, Chile on December 3.

Through its LatAm Network, WIN has enabled a level of cooperation between associations and independent music companies that has resulted in the success of projects like OLMI, the Latin American Observatory of Independent Music, and now launches this exciting new project, FICS. We are proud to be part of the articulation of the independent sector in the region and thrilled about the potential for growth.

To support both initiatives as well as the organisation’s efforts to build bridges between the continents, the WIN board will travel to Chile for the first time to host one of its meetings. The city of Valdivia provides a unique environment to bring together this international delegation of independent music company and trade association representatives from thirteen countries across Asia, Australasia, Europe, North America, and South America to network with the Chilean and Latin music industry, including representatives from the Indigenous People of Chile, and to support the work of the local trade association IMICHILE.

The WIN board will hold its December meeting in Chile and looks forward to engaging with the LatAm independent music community. It will be the first time the board visits this country supporting one of the referential conferences in Latin America organised by our colleagues of IMICHILE.

Having the WIN board of directors in Chile is a way to learn about the work of independent record labels, their success in more developed markets than Chile and Latin America, and an opportunity for knowledge transfer during Fluvial. The participation of board members in the FICS event accelerates the opportunity for us to get to know professionals from different territories and compare experiences with developing countries.

The first activities of WINHUB, an international networking project connecting the independent More