WINTEL 2018 is the third report produced for Worldwide Independent Network (WIN), mapping the global market share of the independent sector at copyright, rather than distribution level. 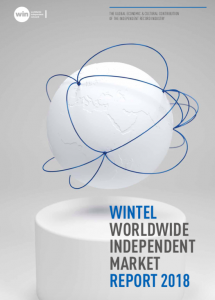 This new report was created and commissioned by WIN to analyse the global economic and cultural impact of the independent music sector. It is created by Mark Mulligan of MIDiA Research, and authored by Music Ally. The results, gathered from 33 countries, represent the most comprehensive assessment of the global independent record label sector ever compiled.

This research shows that independents increased their global market share from 39.6% in 2016 to 39.9% in 2017 with that growth outpacing that of the major labels, whose revenues only grew by 9.7% in the same period.

It is also worth noting that the independent sector outperformed the overall music market, which grew by 10.2% last year.

Alison Wenham, CEO of WIN said: “As 2018 draws to a close, we are delighted to publish the third edition of the annual WINTEL report, which highlights the global independent market share increasing to an astounding 39.9% in 2017 a figure that outstrips both the major labels and overall music sector.  There are numerous interesting outcomes from this survey but one thing that really stood out for me is the fact that 76% of artists are choosing to renew their contracts with their labels, which shows  that the indies are forging great bonds with those they represent. It has been another turbulent twelve months for our industry on a lot of levels but we have emerged with powerful new legislation to protect our businesses, fantastic growth in some unexpected territories and increasing support from music fans who have continued to enjoy and engage with the amazing music coming out of the worldwide independent community.”

Martin Mills, Founder of the Beggars Group and Chairman of WIN commented: “With two out of every five ‘purchases’ of music going to the independent sector, now may be a good time to draw breath and celebrate this incredible achievement. In an era in which diversity of all kinds is prized, yet consolidation is the norm, for a cultural sector such as music to achieve such remarkable diversity of both art and business models is truly extraordinary, and due in no small part to our ability to be strong together through our collective organisations.”